Morning Routines help… Mine seems to change quite a bit unintentionally 🤦🏼‍♀️ …BUT the one thing ☝🏼 that never changes is drinking @defiancefuel water as soon as I wake up. 💦

In fact, if I could give you ONLY ONE tip on how to be healthier, it would be to drink more water. Here’s just a few benefits of drinking water on an empty stomach

Idk bout you but I’d like all that 🙋🏼‍♀️ The Quality of the water you drink does matter… Try Defiance Fuel’s 30 Day Challenge & tell me how much different you feel!

Focus is something that we all, myself included, probably struggle with at times. The problem for me is actually GETTING focused on one thing at a time and getting started without getting distracted by 5 other things first. However… once I “get into my zone”… it’s game over and my productivity is unstoppable. I’m trying to get better at this so these are a few things that are helping me.

2 – Going through the list to determine what is important versus what is urgent and prioritizing that way. Tip – just because something is “urgent” doesn’t always mean it’s “important” too

3 – Overestimating the amount of time you think each of those items will take and planning the day accordingly. Most of the time I’ve gotten stuck thinking projects will take me no time at all and I can easily do 15 things that day… then end up spending half the day on 1 and feeling like a failure because I didn’t do all 15

4 – Taking breaks if I feel overwhelmed. Going outside or doing a quick workout always helps me come back a re-focus when I get to that point. I personally don’t like the rule of taking a break “every X minutes” because it might have taken me “X minutes” to get focused in the first place! LOL! Once I get on a roll… I gotta keep rollin’ until I can anymore.

Something I still need to work on >> being more intentional on Start and Stop “Work Times” in a day so that my brain actually has time to rest at night. 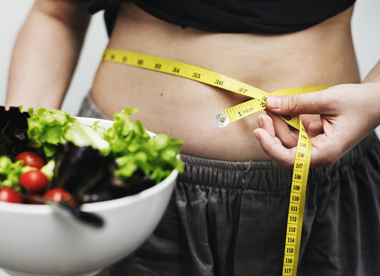 A few weeks ago in the gym, an older man that I really don’t know or have ever spoken to very loudly made the comment to me, “Wow! If you lose any more weight, you’re gonna just blow away!”

He apparently thought it was funny since he was laughing obnoxiously while he said it. I was a little taken aback by the random comment and with a bewildered look on my face all I could say was, “Uhh no… I’m actually slowly increasing my weight this month since I’m done competing for the season…” and just turned around to continue training my client.

First of all, you would think that any man with common sense would know not to comment on a woman’s weight, especially not one that you don’t even know on a personal level.

Second of all, someone making the comment to another person that they are too “skinny” is the same exact thing as calling someone who is overweight “fat.” It is just rude and unnecessary. Also, a few days prior to this, I read a post by a friend dealing with the exact same issue. In short, this friend worked her butt off for a few months and lost a lot of weight to get ready for her upcoming wedding! Instead of her friends being encouraging and supportive of her, they made comments that she looked like she was anorexic. Again, not sure what would make someone think this is an acceptable comment to make to someone else, but that’s what was said.

I came across an article in FitnessRX magazine talking about eating disorders in general, some possible causes, and several other factors dealing with eating disorders. Neither I, nor my friend have eating disorders; however, comments like the ones stated can contribute to many people’s eating issues and body image issues in the first place so I wanted to summarize a few points made in the article. I don’t want to take credit for someone else’s writing so I blocked off the summary of the article because most of it is from the magazine, and I just re-worded a few things.

Ways that you may be contributing to another’s eating disorder, even unintentionally:

Talking negatively about our bodies

Making fun of another person’s eating habits or food choices

Criticizing our own eating

Assuming that a large person wants or needs to lose weight

Assuming that a small person needs to gain weight

Focus on how your body FEELS, instead of only how it looks

Use positive affirmations to learn to talk positively about yourself

Surround yourself with positive, healthy people of all shapes and sizes

Treat yourself occasionally without feeling guilty about it

Positive thinking affects how you LOOK and feel. Compliment yourself daily. Stress and negative thinking can have a greater impact on the way you look more than the food you actually eat. Those who care about you will care much more about what you do and who you are than how you look.

These are good reminders to live by in general. This almost seems contradictory, as a personal trainer, since I can’t always stick to all of these… after all, it IS my job to help people become healthy IF they desire to do so. Sometimes it involves their weight and sometimes it doesn’t. Someone in danger of becoming diabetic, absolutely knows that they need to lose weight so that would be something they would discuss with me – but not something I would approach them with. The desire to be healthy and to make a change has to be there before I can do anything to help someone.

So in conclusion, thinking before you comment on someone else’s body can really go a long way… Food for thought, no pun intended.